Oldgas.com Home
What vintage is this this Texaco Stop Your Motor sign. The Lettering is Green.
Thanks,
Wayne 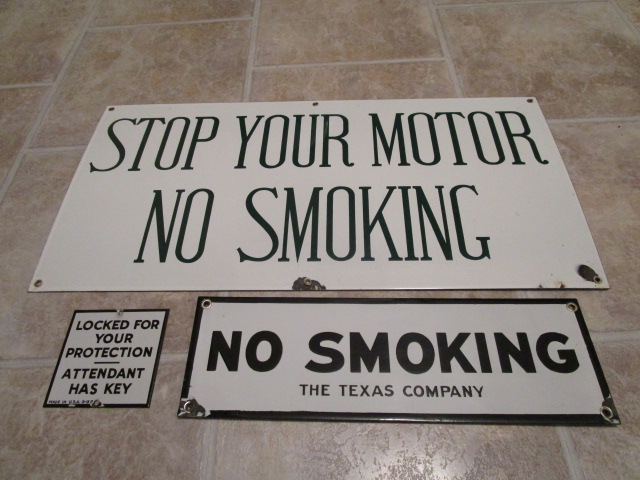 I don't believe it's Texaco ?
I saw a sign like this before at a show, owner said it was Sinclair. I myself do not think it is Sinclair either.
All three signs came out of a very old Texaco Station and I removed them from the walls. The stop your motor was painted over and underneath was the original color of the station. That is why I thought it might be Texaco.
Thanks for the input.
Wayne

T is right --doubtful its Texaco ---in all my years -never saw
the sign --probably made up by the dealer --------------
It could certainly have been a generic sign, sold to the dealer by his local jobber. The dealer may have been concerned about the possibilities of fire, or maybe his insurance man was riding him? Whatever the reason that the sign appeared at a Texaco station, it does not make it a "company" sign, but a lot of the time, was just something the dealer thought he needed.
© Primarily Petroliana Shop Talk