Oldgas.com Home
Sorry to bother everyone with this question about a common sign, but I can’t find anywhere on-line (or old gas) what company this sign belongs to. I’ve heard people say Pure, Marathon and Mobil. Please help.

Thank you all for your help,
Steve 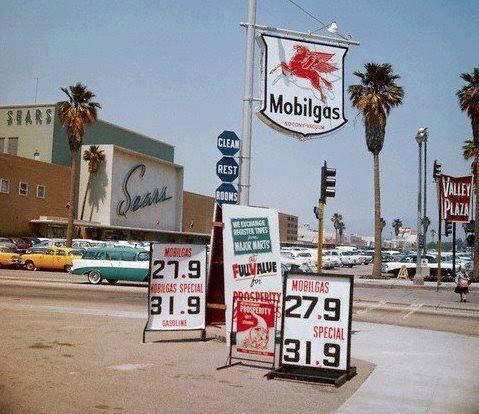 Very kind of you.

As seen, Mobil for sure....they also used the sign in magazine advertisements at the time.
Darin
Man Steve, even I knew that one.

Was this sign exclusive to Mobil? I was told mine cane out if a Cooper tire shop.
Somewhere I have an ad for this sign and I believe it was a generic sign and sold to anyone who wanted to buy one or a truckload.

the picture I posted shows this sign being used on a mobil station-
I believe I've seen this sign used on some Union 76 & Richfield stations .. ...

Very kind of you.

That's a beautiful picture from, I think, North Hollywood during the Eisenhower or Kennedy years. It's a few years before my time, but I've been interested in that era and its automotive culture ever since I cam acroos this article almost a year and a half ago about an East Coast phenomenom.

Quote
"For Giants fans, it's a lifelong commitment," Renstrom said. "Some would call it a sickness."

A sickness that actually made the Connecticut economy healthier on Sundays in the 1960s. Back then, home games were blacked out in local markets even if they were sold out. That meant people crossed the borders from New York to Connecticut to watch the Giants on what was then known as WTIC-TV, Channel 3, a CBS station.

It became a ritual for fans to visit bars in the New Haven area or rent motel rooms in Connecticut. The Yale Motor Inn in Wallingford was a popular spot, and some establishments offered special rates to lure fans from New York.

When the Giants-Packers NFL title game in 1962 was televised, fans from New York came as far north as the Berlin Turnpike to find motel rooms. That game was on Channel 30, an NBC station. Because that signal did not carry as well as Channel 3, New Yorkers had to drive even farther into the state to watch the broadcast.

The blackout rule did not change until 1973, so the migration of fans from New York to Connecticut continued through the 1960s. Giants fans dominated the state.
© Primarily Petroliana Shop Talk