Oldgas.com Home
Ive got a round Mobil gas pump and having a hard time finding much information on them such as the years they were made and what other stations used them. Mine is a Wayne, Im new here so will try to figure out how to post a pic


WOW! That is nice!
1964-65 , came out the same time as the Ford Mustang. They were made for Mobil, but later used by others that took over the station.
That's cool!
I have been looking for one of those!
I just stumbled across it in a back room of an antique store, it was pretty rough when I got it. Its dang near impossible to find any information on the years of production. Someone did tell me that Phillips 66 used them as well but by far Mobil was the main station
I’ve had a few, they also make one that matches that pump that held oil & maybe a credit card machine.
boy finding one for oil and credit card machine would be a needle in a hay stack find
The plastic top for those are incredibly hard 2 find, most are cracked or broken.
Back in the day those are the pumps I started pumping gas with in 1971 in my hometown of Chalfont, Pa. Yes, as CGGAS said, there was a matching one at the end of the island that held oil cans and the credit card machine. Moving back to Pa. in the late '90's, my old boss Don was closing up, and this was before I started collected gas stuff. Sadly, he threw most of the collectibles away in the trash I later found out , including a number of those pumps! Would love to find one in good shape for fair money!
A couple of years ago I wrote a large article for "Check the Oil," with pictures about these pumps and the stations that they were in. This pump was made by both Wayne and Gilbarco. They were first made in 1985, I cannot find what year they quit making them. They were (along with the stations) designed Elliot Noyes. There were three versions of the pump, the twin (like you have), the single and one that was not a gas pump, it was a cabinet to store oil cans. It is pictured on page 400 of my Gas Pump Bible book. I also have some literature on the pumps available.

Jack Sim
Here's a pic of all three: single, double, and can holder. 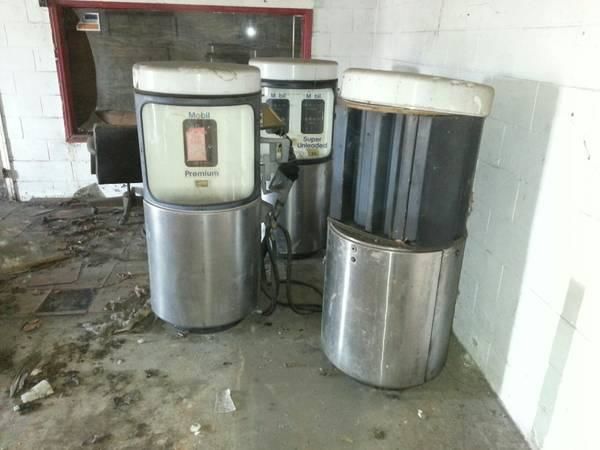 Jack,these pumps were made much earlier then 1985.
Per Jack's Bible 1965 is the correct year! I believe a typo is the culprit here.
Yes,1965, just didn't edit the reply before I hit the button.

Jack
Jack, they were made in 1964 as I have photos of them with the New Mustang ads.
© Primarily Petroliana Shop Talk