Oldgas.com Home
Does anyone know for certain, in what year was the outline on the "T" changed from black to white? I can't seem to find this information!!

thats one good question.. im stumpt
RIGHT AROUND 1935-1936
I have never read anything definitive, nor spoken with anyone who was associated with the compnay, in determinimg the transition from the black perimetered "T" to the white. It was, however, a question a friend and I explored during 27 years of accumulation so my response is based purely on personal experience through items owned or observed in other collections. We had come to the conclusion that 1939 was the final year. We saw many examples of the black "T" dated '39 but nothing ever later.I have both a porcelain "Consignee" key hole and "No Smoking", with the black "T", and each are dated 1939. But, to show you no one has "seen it all" nor knows it all, this year produced a "Distributor" keyhole sign ink-stamed by Veribrite-Chicago 7-46. It throws everything I thought I "knew" far off center.

I just got a new computer and do not yet have software to reduce photo file sizes but would be happy to supply pictures sometime soon. Let me know at don-brock@comcast.net if interested.

I believe that Veribrite sign was a reproduction.
Here 's a completed listing on eBay of an original 1939 black T keyhole

I couldn't find the completed listing for the Veribrite sign that was mentioned.

I do believe that Doug(blacktee), would have a pretty fair idea... LOL

Between Doug and Erol (A good portion, if not most of the photos from the book "A Tour with Texaco were taken of Erol's Collection) and I must not forget Jamie... I don't know 3 more knowledgeable Collectors about Texaco history... And all 3 are, IMO, "straight shooters" that aren't afraid to share their knowledge.....
Very interesting guys!! Thanks for the input. So at least, as a naive collector, I have a much better idea. Thanks!!!
heres the web site to re-size pictures.
http://cranno.com
I have a Consignee sign that is dated 3/40 with the white outlined T, for what it is worth....
Thanks for the website for re-sizing pictures....very helpful!

As far as the Veribrite being repro.....let me get some pics posted and see what you guys think. I'll have to admit I questioned a few things such as the very fact that it was a black "T" and '46. As mentioned, never saw ANYTHING after '39 with black. Also, this one is dated on the back....every other keyhole sign I've seen or owned were dated in a corner. And, one of the black outlines is squiggly....I figured it was just a factory error......most other aspects appear legit...but I've been fooled before.
Here's the link to the '46 Veribrite consignee sign.
Did I get a fake?

http://www.ebay.com/itm/130676824186
One more inconsistency with this piece, as compared to all others I have seen or owned, is that the black perimeter (around entire sign) does not form a circle around the star.
That's a pretty good repro...if its a fake? Even with the inconsistency with the black "T" and the date. I would lean to it being an original; in my opinion.
IMO there was a transistion period phasing out the
black T which seems to be around 10yrs on certain
pieces starting in the 30's & ending in the 40's..

I don't think so either but anymore nothing would suprise me..

In my opinion, it's an original.
OK Used Cars,

You have already mentioned some of the reasons why I too felt that this sign could be reproduction. A couple more issues about that sign that concerned me are:

How irregular the Texaco letter are (the TCO are longer than the EXA).

The Veribrite stamp has been used on Texaco reproductions before (there have been a few double banjo, white T, no smoking signs with that stamp on it). Very FEW Texaco signs after WWII had an ink stamp on them (I haven't seen any, but I'm leaving open the possibility). Of course with the exception of the Canadian made P&M signs.

I'm not trying to beat up your sign, and I could be wrong (I'm just like everyone else on this forum, a student of collecting). In my opinion, these are the type of signs that will destroy our hobby!

I too believe there was about a ten year phase out, but in my opinion Texaco was quick to change their signs (they were slower to change their can designs, especially their Marine cans, and handy oilers).

one other thing I've noticed concerning this subject, and that is this. I've seen a few pieces where the black outline did not envelop the bottom of the "T". Where the black lines just ran out into the body of the image. This is an obvious repro but it shows what I'm talking about. It may be one way to spot a repro.

I wish it would be that easy. Here are a few pictures to show you that there's a little more to it.

Remember, Texaco signs weren't made by Texaco. However, the cans were. Notice the difference at the bottom of the T.

NO offense on any critique of the sign. I appreciate the various points of view. There's a lot of new junk in the hobby and we all need to help one another to discern the difference. If it's not vintage....and there are numerous descrepancies to make me wonder.....then I am not interested in owning it. BTW...that's a keen eye to notice the differrence in letter size. I thought I was pretty detailed in my scrutinization but missed that.
Stay Kool Daddyo!
Just to delve in a bit deeper on the Veribrite stamp, did they EVER mark AND date stamp any signs, similar to what is being shown here? I know they used a "rubber" type stamp on the front of older signs, but I've only seen the company name done that way, never a date code. But, like the lubester signs illustrate,
some signs were rubber date coded, but are those known to be made by Veribrite company? I hope my query is making sense!
The brackets make the sign more believable, but I don't like the overall look of the sign in question personally. I would hate to think they are perfecting brackets for signs, as this would be an added problem for Mobil collectors with Pegasus signs and some other Mobil signs. I have seen some truck signs that I think are suspect on Ebay, and they had brackets.
Darin
The 1946 keyhole is original IMO.

I have a pair of keyholes that were found at an old bulk plant, stamped veribrite 1946 on the back. However, mine do NOT have the tabs (split back grommets instead) and they are consignee plates with a different name. Same design etc.

I believe Veribrite filled a few orders for Texaco in 1946 only.
notice some black T's have black at the base of the T & some don't- different sign makers?
It could be different sign makers. Another difference I spotted one time in Texaco signs are the Fire Chief pump plates. Some have a red hyphen between the words Fire and Chief and some don't. I have not see any evidence that relates to any particular year either.
Alex,

I think Texaco stopped hyphenating Fire Chief around 52/53.
I have a Keyhole sign as discussed without the black outline all the way around the circular part. Mine doesn't have any tabs on back, just mounting holes with grommets. It says M.M. Atkinson Consignee. Don't have it here so can't confirm any markings on back, but the T is black outlined.
Thanks, Jamie. I have wondered about that for some time. Wonder why they switched???
found this sticker after removing some paint to get to it. this is the tag on the lubster. so this decal was placed on it after 1940? 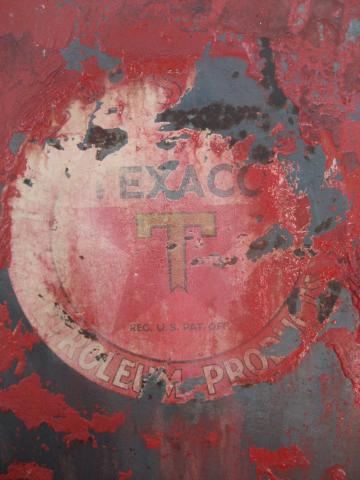 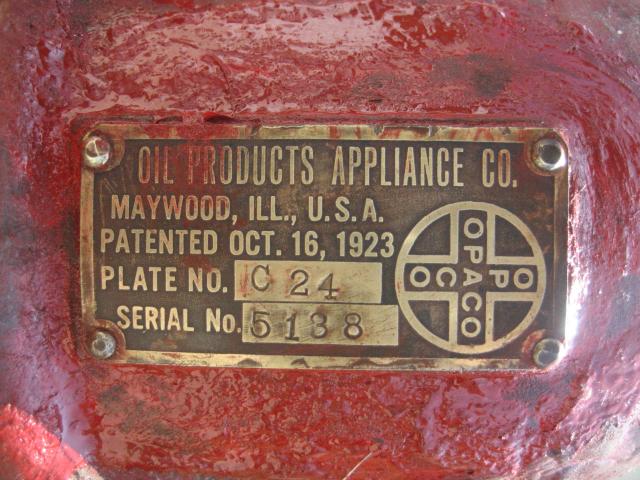 Most likely the decal was placed on the tank in the early 30s (IMO)....

Fewer and fewer stations used their oil dispensers on a regular basis once 1qt and 5qt cans/containers became popular....

Maybe I missed it, but always heard the "A" in Texaco should have a red triangle. The repo's I've seen are missing this extra detail.
FYI ... I've seen repro globe lenses on Ebay that have the red triangle inside the "A" in Texaco, so I don't think this is a good sign to determine if an item is an orignal or a reproduction. Greg
I seriously Doubt that TEXACO made & printed their own cans. Oil Companies ordered Open Top printed cans from can companies & filled them at their refineries w/ their products, then sealed the cans. Quality Control that assured the Public they were getting what the oil company said was in the can.
I agree with above statement..

Texaco had there own printing, stamping and canning plant at Port Arthur, Texas. I have quite a few photos with the machines going back to the teens and twenties. Mostly women working the equipment.

No doubt, but that was before the 1932 patented design of standardized round qt motor oil cans w/ rolled on sealed lids.
There is a great book about Texaco's Port Arthur Works by Elton Gish. It has some amazing pictures of Texaco's can production lines at Port Arthur. I bought a copy after Doug recommended it on a thread last year. It was a well spent $24.

http://www.texacohistory.com/
There is alot of misinformation out there regarding Texaco logos.Some people are selling memorabilia from the late 90's and newer and claiming the item is from the 50's or 60's.I have attached the true logo history below.The black-edged T was discontinued in 1936 when The Texas Company changed it's name to Texaco.They returned the black T for a short time in 1948. 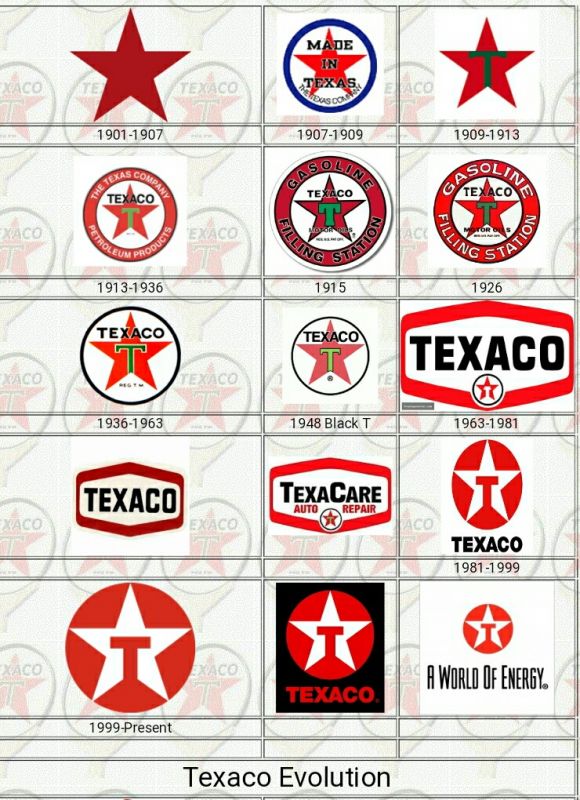 Wow, that is bringing up an old post! Thanks for the info, but I would definitely not call that complete. I don’t know who compiled that chart or where it came from, but right away I noticed two logos that are missing. 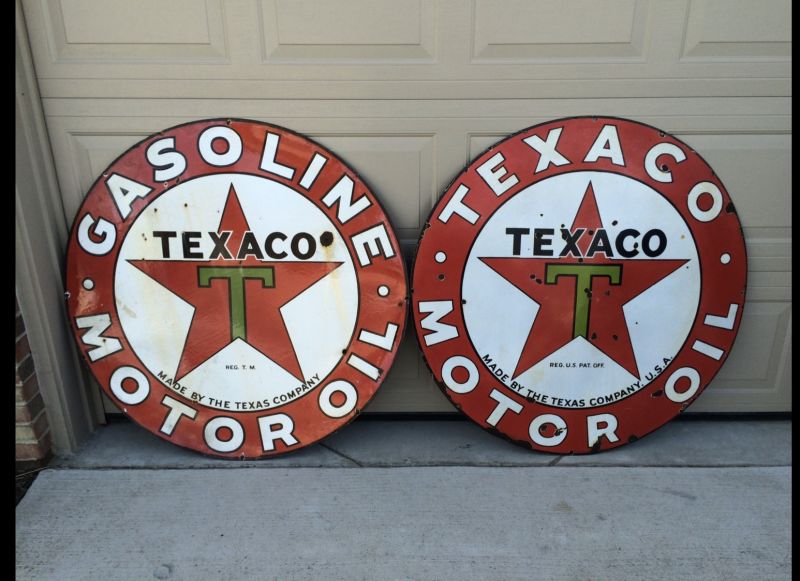 Don,
In reference to your Veribrite being repro go back to the auction, look at his positives/negatives, he admits they are "NEW."

Jack Sim
Holy Old post's Batman!! July 7, 2012! This was one of my first post's. That was the spring I started in the hobby when I was like a sponge asking tons of questions!! I remember Dick Bennet posting one time telling me to calm down I was asking so many questions!! : ) LOL!!

Larry, not to crash on your post, but I wouldn't put a whole lot of faith in any of these google search logo pics. Here's one showing the 1948 to have a white "T"!!

This question is right up there with how many licks does it take to get to the center of a tootsie roll tootsie pop!!

Definitely a blast from the past...LOL
© Primarily Petroliana Shop Talk