Oldgas.com Home
I have been on this earth for quite a while. Certainly have more years behind me than ahead? I remember the JFK assassination in Dallas.....bad times....then Martin and Bobby and Malcolm. I lived through them all. However, Today is the anniversary of the attack on our soil by foreign terrorists. Today is 9/11.......eighteen years later. As with the above dates.....I know exactly where I was and remember the days and weeks, following, as if it were yesterday. Always remember......Never Forget.....Paul www.severngaspumps.com
On 9/11/01 I was at work in a noisy, busy body shop. During a work day back then, I wasn't exposed to news broadcasts, even at lunch time. Didn't have a smart phone then with access to the World as so many do today. But at that time, there was an odd circumstance. One of my co-workers at the far end of the shop brought in a tiny TV with a 6" screen. If a boss would have seen it, he probably would have been told to take it home, but that didn't happen. When he saw the first plane crash into the building on a news bulletin, he called out to the rest of us to come and see it. The clip was shown over and over. We were shocked that an accident like that could happen. When the second plane hit, we knew it was no accident. I'll never forget those images, clearly still in my head. The thought of innocent people mass murdered to incite terror still upsets me greatly.

I still say prayers for the victim's and first responder's families and the people today who defend, secure and rescue the people of America wherever and whenever needed.
One of the few times in my life where I can remember exactly where I was as well as the time. I was working as a field service mechanic for a heavy equipment dealer. I had to run to the parts store for something and the story broke while I was visiting.

I was on facebook this morning and saw a photo of the fire truck that is missing the front half. There were a bunch of hero's that day who saved alot of extra lives, many of them lost their own. One of these years I need to take a trip to NYC to pay my respects and visit the memorial.
I was right here sitting where I am this morning. Due to my strange work sch. it was my short week and I was off. I remember the wave of emotions ,shock sadness,then mad that something so ruthless could be excuted by so few. We had dropped our guard and became to comfortable as a nation.

But this day isn.t about that its a day to remember those lost and their family members and the acts of heros who showed their true colors this day 18 years ago.
Was talking to some friends yesterday and counting the years. Time flys seems like yesterday.
I can somewhat remember the Challenger explosion when I was in elementary school.....we were all watching it live as we had studied very closely Christa McAuliffe being the first teacher in space. I mention this because I do not have a lot of memories of much under 10 or 12 years old, which I was 9 years old when we lost the Challenger crew the end of January of 1986.

I have vivid memories though of what started out as a beautifully clear, blue skies day on Sept. 11, 2001. I will never forget the clear blue skies that day. We had the local radio station on in our office all day, every day. I remember the first announcement of a plane hitting the WTC. Of course it was concerning, but at that point there was no confirmed word on the size of the plane, we assumed it was a small plane that probably didn't do much damage. When the second plane hit the South Tower shortly after 9 am, it started to dominate the news. When the 3rd plane hit the Pentagon, I got on the internet to see what was going on. At this point, we had dial-up internet and had to pay for every minute, so I asked my boss if it was OK to log on. There, in a live but grainy feed, we could see what was taking shape in NYC and I could feel great heaviness in the pit of my stomach, and the wonder of WHAT OR WHERE was the next target. I felt unsafe in the great U.S.A. for the first time in my life.

That day no work was done at the office......most all of the country had stopped working. I will never forget going outside that night and not hearing or seeing ONE plane in the sky. I thought (and hoped) it would be the only time in my life that would ever happen, not one plane in the sky. There was a deafening silence that we hadn't heard in modern times, we are so used to that air traffic above us that we don't even notice it. Hopefully as the years go by, the young AND old don't forget what happened that day.
Darin
Every year my hometown holds a memorial service. Eleven residents didn't come home from New York that day, including a firefighter from my fire company. Here are some photos taken prior to the service. 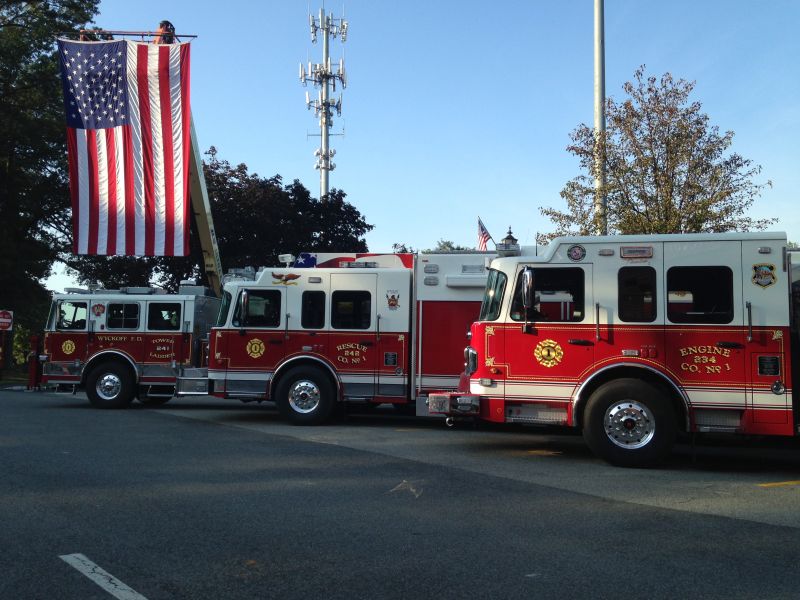 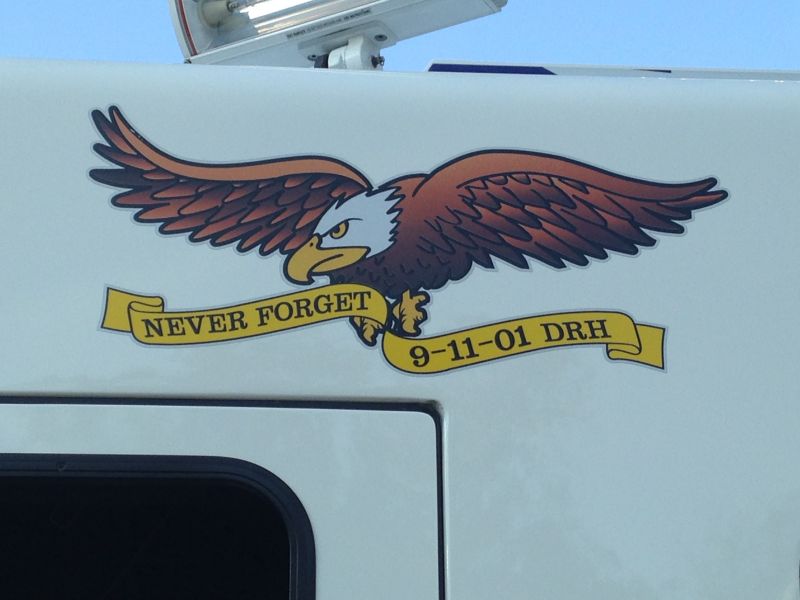 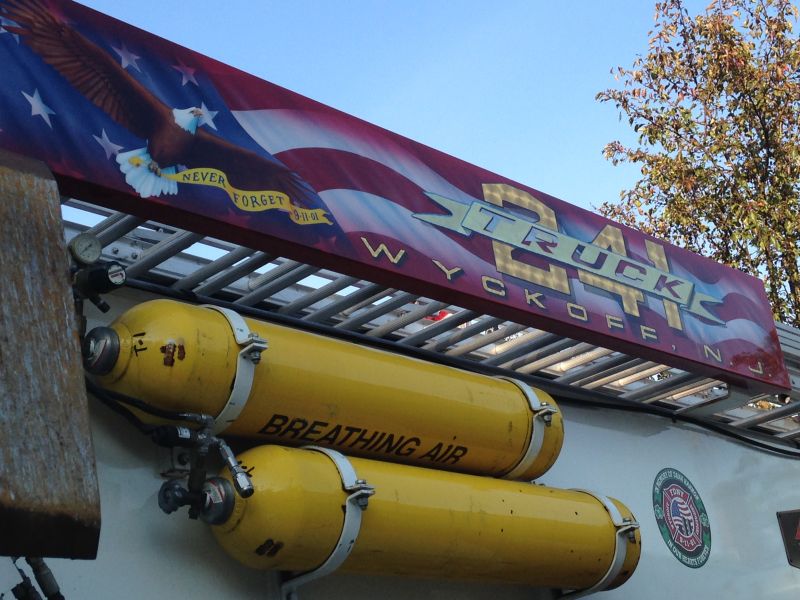 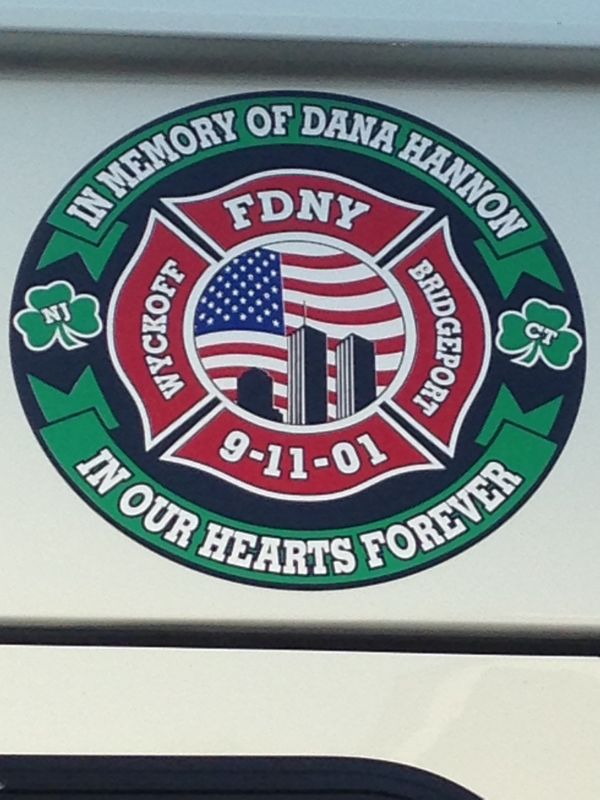 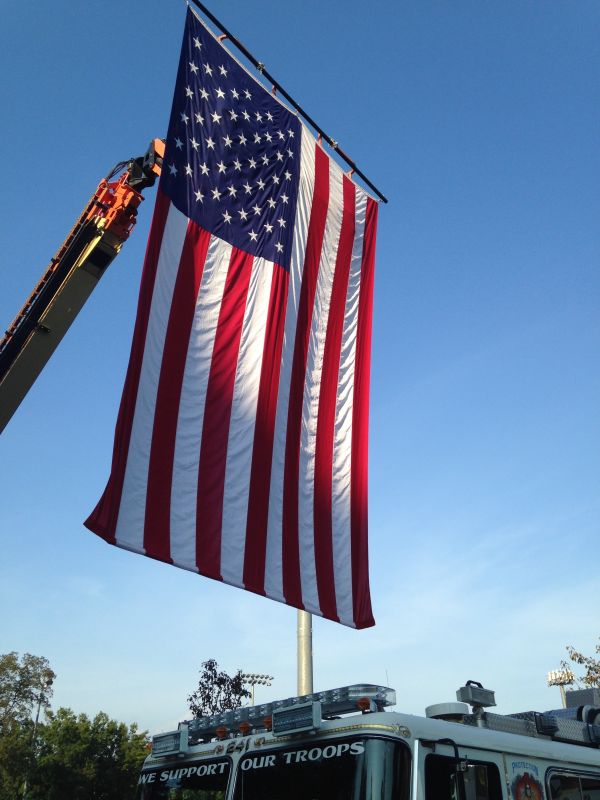 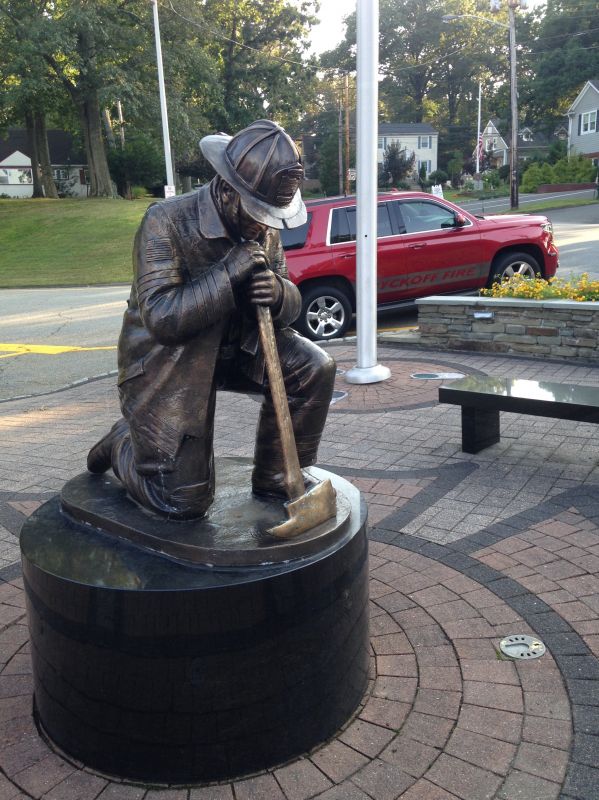 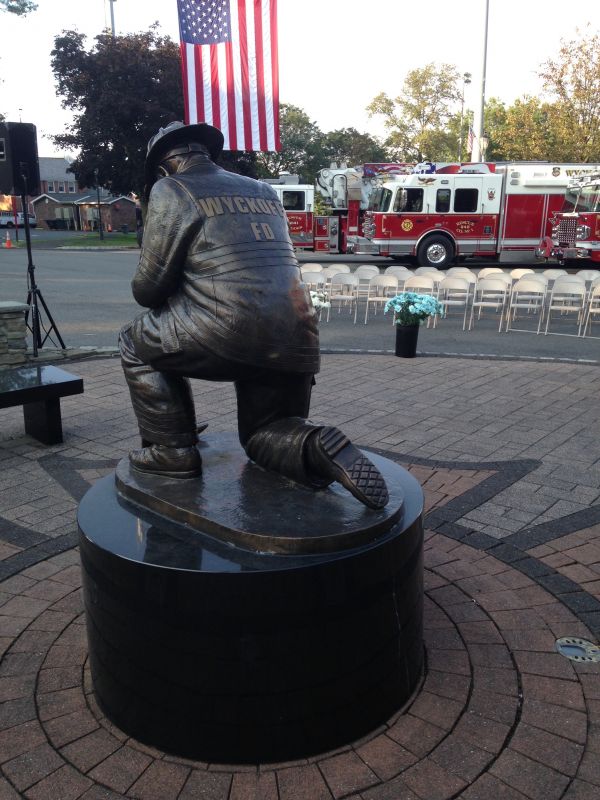 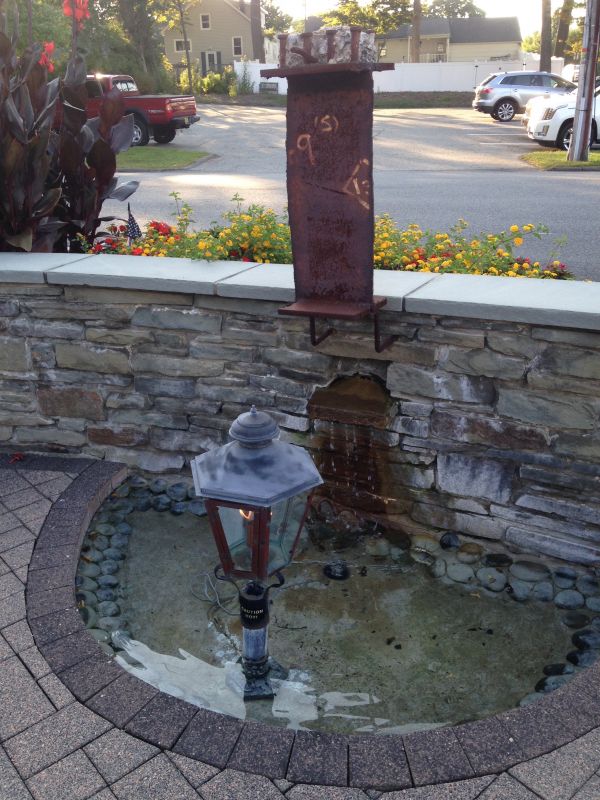 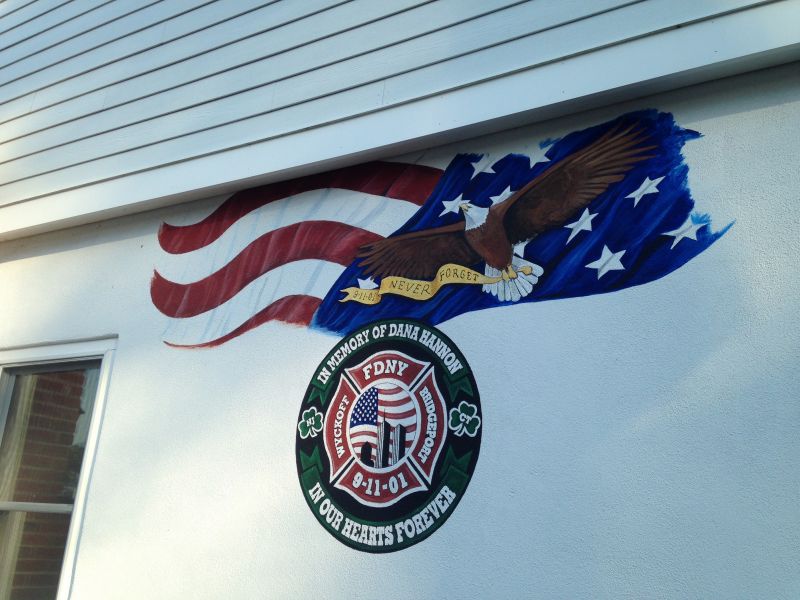 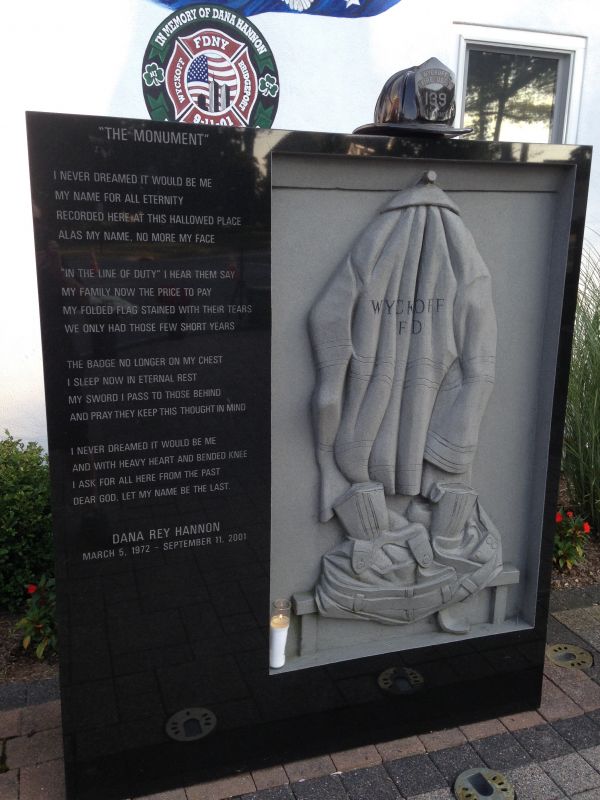 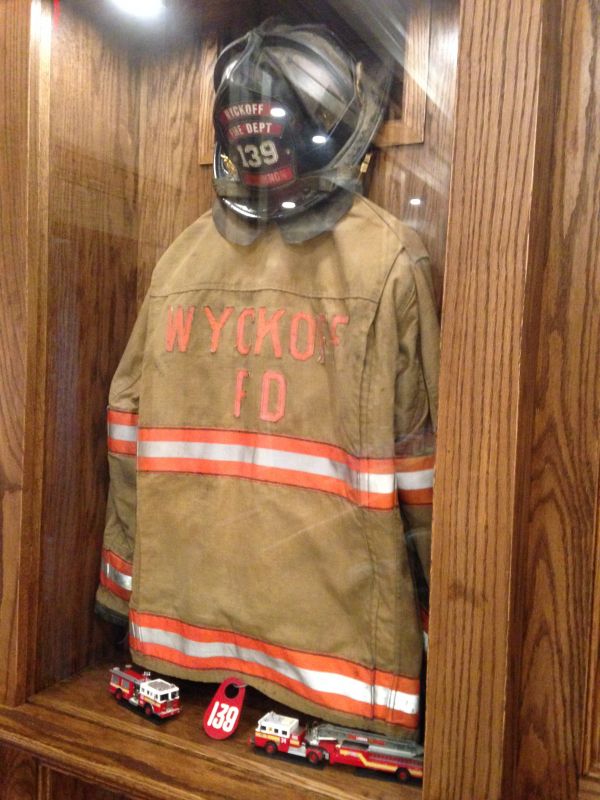 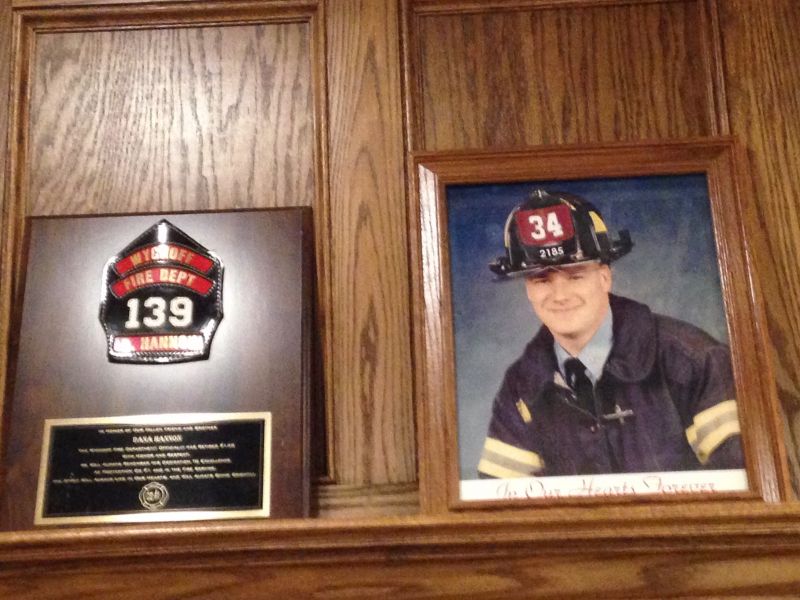 Nice, very nice memorial. Was sitting in the front room watching the today show when it happened. Getting ready to go to work. Still remember sitting there with the sun coming through the windows thinking at the start the metal will fatigue with the heat.
© Primarily Petroliana Shop Talk