Oldgas.com Home
Geez. Is anyone else watching Pickers now? Wow, did that guy have some stuff or what!! Those two should have been buying everything at those prices!!!!!

Great items.
The Wayne 866....for that price! Too much?!! WHAT?! I think it had the nicest porcelain door I've seen so far. Some nice stuff there for sure, bought at super prices. If I were only able to find such a place.
Darin
Still think its all BS and staged
Of course its staged! Do you think they're gonna film a show where they don't find anything? I bet they get a lot of calls to come and look at stuff just because of the TV factor! Good entertainment if you take it for what it is!!!
That hardware store had some nice stuff. Those Shell signs were clean. This show has killed the hobby. Everyone with a gas pump or sign THINKS THEY HAVE GOLD. Look at craigslist- People asking $1000 for a $200 Pump. As with all fads it will go away soon.
I was on the fence the other day when this show came up for discussion and I was ready to defend them and say lets just enjoy it. Well I just changed my mind. After seeing the globes and shell signs they bought. It just seems to good to be true. I bet you if I would show up at that store and want to buy some of the same stuff I would be run off. Why would they pass on a clock face Wayne 60 for $600 dollars? That makes no sense at all. I googled Bill Shull and found some info on their trip to his hardware store and in the local paper article from Newberry they stated they don't drive their van to each location. They fly into town to do the show. I guess someone else drives the van or they haul it from location to location. I know it is hollywood but come on lets be real. Who would sell two shell signs in that condition for $475. Original all glass Atlantic globe for $75 and several lenses for $10 each.
Because it is ALL a fraud, guaranteed they are not buying that stuff real cheap as they lead you to believe, Same with passing on under priced items, All just to get the viewers up on the edge of their seats.
Why drive the van there when you can rent one for less than the fuel it takes to transport/drive.
C'mon Dick That is a Mercedes Diesel Van that gets 25-27mpg LOL
i was right over there by newberry sc the past two weekends. sucks being that close and just not knowing the stuff is there. did they leave anything good? i dont have cable to watch the show.
What, down hill w/ a tail wind & empty van?
Nope Dick. Even Loaded. They are a 4 cylinder turbo diesel. My buddy has one and gets 24Mpg In town loaded with plumbing tools. They are a great van...They do not have the same driveline as the sprinter.
They are still finding this stuff and we get to see it right? I could care less if they buy it and for how much. Where else can you watch tv and see all this cool stuff?
It has been great for my business. I say, I resell so if its worth 300 I need to buy for 125 or less. They get it now. They understand that I need to make money, have a shop, truck and other stuff to pay for.
as far as great deals.. they are out there. My kendall globe inserts, paid 25 each, sold 440 each.
The show is just that, a show. Staged and getting worse, but its great for me.
I agree with Bill, staged or not, they do say they have to make a profit, that is all we have to say.

Jack Sim
Staged for tv ,we all agree why can't we not watch? Thats the magic of tv,and is based solely on ratings. I'm still waiting for them to stop by on their way out of TN. Quess they might have flew out huh. What will it do to the collectables,remains to be seen,I think. Barreat Jackson had big impact on autos, good if your a seller,not so good if you were buying.
Still love it - the characters and thier back and forth is pretty funny. I guess I am still too new to know what pumps are worth what - I do remember them getting a 15 gal visible once and now that I am getting into the hobby - I haven't seen a 15 gallon before, so maybe it's rare?
A 15 GALLON WAYNE, I thought it might come up. Went straight to jacks book. Nope not there, cyclinder looked 3 foot long. Quess their out there huh.
Take the show for what it is....entertainment. I hear people complaining about the show driving prices up. I guess those $75 gill body globes are too expensive?
It wouldn't make for good TV if they showed the eighteen wheeler that follows them around to buy entire collections which is what is happening. I have a friend of mine that grew up with them and I said how could they buy that Standard sign and leave all those other cheaply priced signs??? His answer was "They don't leave anything behind." When the camera stops they buy and load everything they can flip. I still hate that damn show. The Ford Neon Tractor sign got my blood pressure up big time. I want that damn sign:((((
Strange how much "commotion" these 3 (have to include,Danielle and her tats) have brought to American conversations in the last 2 years.

Today while working in the garage, my new mailman notices that the overhead door is open, so he hand delivered my mail to me.

He sees some of my collection on display and the very first thing out of his mouth is..... "Have you seen American Pickers?.....

In the last year I have met 1 person, that did not know that show.
Retired TV guy here... its all about ratings. Ratings are money !!
Quote:
It wouldn't make for good TV if they showed the eighteen wheeler that follows them around to buy entire collections which is what is happening.

Exactly, that's why they don't show it.
Originally Posted By: Bob Richards
He sees some of my collection on display and the very first thing out of his mouth is..... "Have you seen American Pickers?.....

No kidding! I had lunch with some people from work and some dealer folks today at Cracker Barrel, and I mentioned that I collected signs and such like the ones on the walls. The first thign I heard was "Have you seen that show... what is it.. pickers or something?" It never fails.

Wes
Wes, You're probably the only person that hasn't seen the show!
Oh but I have! I watched a few episodes on the history channel website.

Wes
Originally Posted By: thermactor
Oh but I have! I watched a few episodes on the history channel website.

Like you Wes, I just watched last night episode on History.com.

I esp liked when Frank asked Danielle to send The Coordinates in ALL CAPS so that Mike could read it (with his bad eyesight!). LOL!
When I go out to the local flea markets here in SC with my spread of toys, signs, and other miscellaneous old stuff for sale I always get that "You should call American Pickers" *****. Why would I call guys in Iowa? And isn't it funny how they never travel west it's always east of Iowa?

I always suspected they buy alot more than they let on as I know guys in my local area that travel up to northern states and buy truckloads of primitive/antique stuff to bring down here to resell on a regular basis.
Had a guy call me today wanting to sell his old pump. I don't know what it is but he was not going to take less than 600.00 for it because he saw that is what it was worth on pickers. I might check it out someday. Probably a Wayne 505. Maybe I can pull some of the Pawn Stars lines.
i know if i was close by this guy i would be beating his door down, with a pocket full of hundreds...thats if pickers left anything. chris
If they have a semi and clean all these places out after the show stops tapeing. Where is all the things for sale. They sure do not put them on their website antiquearchaeology. I have looked on their site several times after shows and they never have much for sale.
I know a lot is set up for TV, but hey, it's entertaining and that's the goal of the show. That brings in the advertisers. Look at the merchandising they have taking place as a result.

"Ride the Wave" while you can.

It was great seeing that stuff. It's fun to watch.
well i went today to the hardware store. bill was nice as can be but wouldnt sell me a thing. hes waiting for the pickers to come back and he wants to leave everything there. he said they didnt buy the wayne 866 because they werent in the market for a pump. even at that price? its all staged i guess. bill said that he used it as publicity for the store which im sure it helped him a lot. im just gonna stop in every once in awhile and maybe he will budge one day on that shell penn sign. he gave me some cans though, haha.
Did he still have a black eye?!?!

That's cool that you went there, good luck.
Anyone remember this pump? Here it is now in my shop! 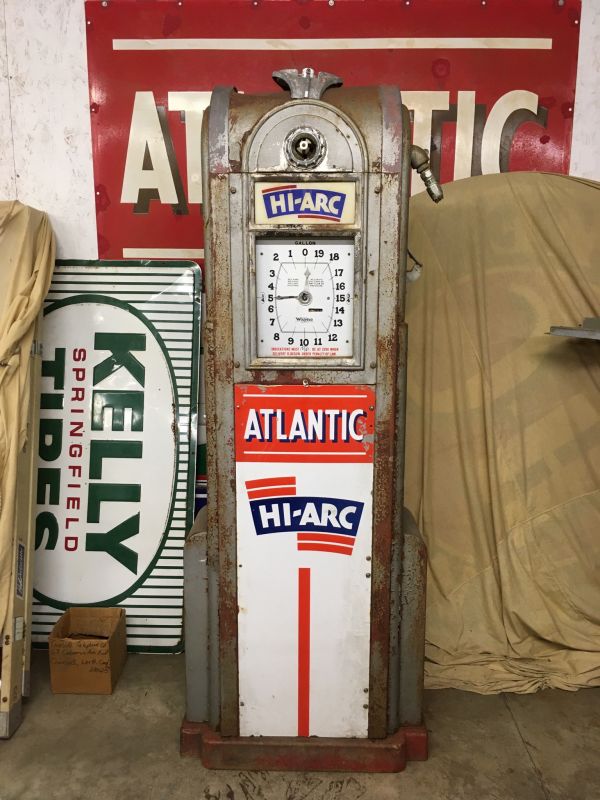