Oldgas.com Home
I just started up a new Image Gallery on Shop Talk for troublesome unmarked signs and globes.

This new gallery forum can be a good resource to look up questionable items. Three (3) pictures per post for back side and closeup of same item. There is room for a description to point out tell-tale ways to spot that unmarked reproduction or fantasy sign or globe.

Type in the wording on the sign or globe as the Subject. This will assist those looking through the gallery for certain items.

This is not intended for discussion. Keep your questions and discussions on this forum.

Blame this site? No, because I use my own intuiton and if I get one its my own fault. For the most part, I dont buy at shows or malls as its the easiest place to wind up with a repo. Ebay is safest since you have 30days using Paypal to send it back. Im just saying, if you post a pic then also post the REAL SIGN PIC so we can all see the differences between the 2. Simple.


Originally Posted By: Bud Miley
Blame this site? No, because I use my own intuiton and if I get one its my own fault. For the most part, I dont buy at shows or malls as its the easiest place to wind up with a repo. Ebay is safest since you have 30days using Paypal to send it back. Im just saying, if you post a pic then also post the REAL SIGN PIC so we can all see the differences between the 2. Simple.


(You don't Buy at Shows, Ebay is the safest), WOW, I don't think I need to say another thing.
This is what I was going to post for the benefit of beginners.Order a Vic's and a GPH catalogue.They both have pages and pages of repop and fantasy signs.If you can find someone who has kept a file of older issues,do it as their product lines have changed over time.

As has been pointed out,you had better know when the diminsions are the only thing to tell you the difference at a glance.That goes for 12"round as well as some pump plates.Buy the reference books,then you will know what to look for.

Real Good Idea to show original and repo pics to compare, as everyone isnt an expert like KZ1000! What about the Ford Hanging sign pictured over there? What does the real Ford one look like? Differences etc.. I thought it was going to be Gas and Oil sign pics there?

well unfortunately some of us don't have the real signs to post next to the repo...sometimes the sizes are the same however many of the the differences are in the thickness of the porcelain which is difficult to show in photograhs......

these photos are posted just to make people aware that people are reproducing this particular sign as some of us buyer other signs that are not gas & oil & actually Jim said "Members are encouraged to post images of troublesome signs and gas globes"...if the moderators don't like the photos of these other signs, just remove them

If that hanging Ford sign was an original it woiuld have disappeared very quickly for a buy it now of $785...An original in this condition would be easily $2500-$4500
Like KZ said, we can't do everything for people who don't know the difference, i would think they need to take some responsibility in the research & education it takes to make an educated decision on a major investment.......
I agree with KZ- You should do research, but some of these signs are getting pretty dam good you have to look hard to see the difference(without holding the sign in your hand). Many are very obvious but some are pretty darn close to the original.
You can see the obvious on these but looks pretty close in my opinion.

Very Few vendors at a show will/would have Repop signs For Sale unless that was their business. GO to shows, make friends, pickup signs an Really look at them. When in Doubt ASK others that are standing around looking at stuff. EDUCATE Yourself, Don't rely on Pay Pal/Ebay to get your money back 'cause you made Mistake[s].

On ebay, before bidding look at other auctions held by seller, check their past auctions, check their Feedback, check their Location/Country. Ask Yourself WHY a seller in INDIA/ Argentina would have soo many American signs?

I'm REALLY surprised that MORE signs Haven't been posted on the Special thread that Jim has sent up.

Any opinions on this Texaco Outboard Motor Oil sign?

Thanks.
FANTASY, completely BOGUS
Even the word "outboard" looks funky.
Thanks. That was my opinion as well. Had a guy appear at a show with the same sign along with four 'rare' Speedwell signs among many other newly discovered porcelain signs. He was somewhere out of Missouri.
It is sad that you vets are bitching about listing pics of fakes vs original. i think this would be a very valuable tool for anybody in to this stuff.usually if you know the REAL it is pretty easy to tell the fake!i believe this would be very benefical to the hobby. remember this should only be used as a guideline. if you screw up it is on you!honestly i would like to see somebody publish a book on all known fakes ever to be created.when i got the porcelain enamel advertising guide by MICHAEL BRUNER & saw the coke BRAIN TONIC sign i was in awe. then to find out there was a major controversy about it & others i was floored.a sign that looks this right that could be wrong is nuts.looked right to me. so what are you to believe is true.in short i believe it is up to all of us to help everyone out so theese do not get out & in to collections & back out in years to come.repops are hurting the hobby as a whole.
Originally Posted By: 57tbirdkid
You can see the obvious on these but looks pretty close in my opinion.

the replica does not say "USA", and the fonts are badly wrong, too.
Hello I am relatively new to this type of collectible s. I am looking for info on this sign its a 24" round sign that reads "ENARCO C1 MOTOR OIL SIGN". sorry cant post a pic. Was this reproduced and what are some things that will help tell if it is. Thank you for any info you may have...
Here is one hope it helps someone. 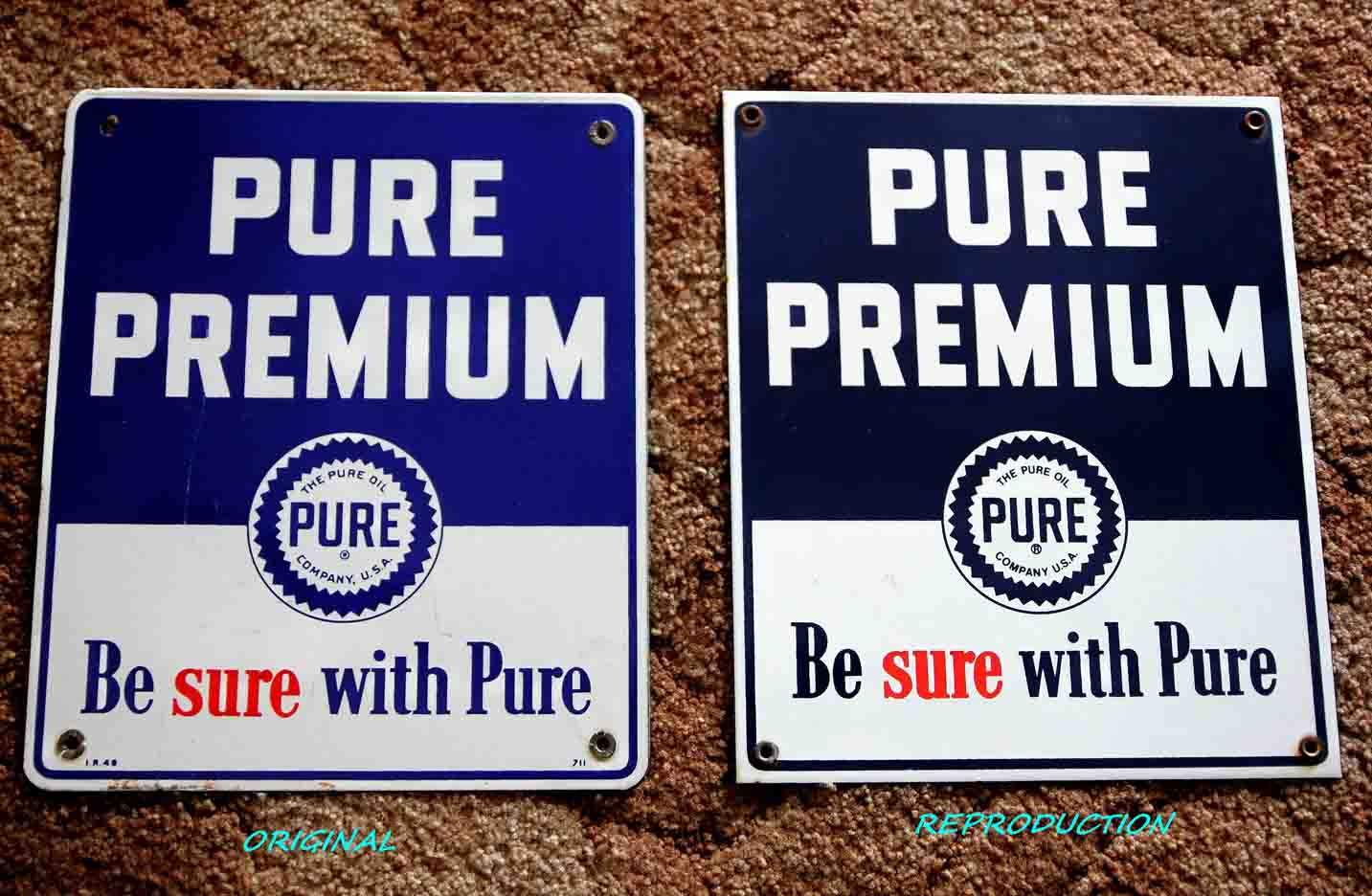 I thought some of the letters looked sloppy.

Thanks in advance for any info..

The plate is good and if thats the price, its a good buy.-IMO
EBAY has a fraud and fake forum, where posts or userids can be listed, by using that forum sellers of fakes misrepresenting items can be called out.
where is a link for it
http://oldgas.com/forum/ubbthreads.php?ubb=showflat&Number=664999&page=1
Tt
© Primarily Petroliana Shop Talk