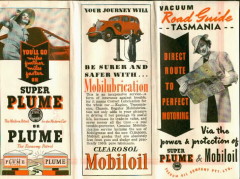 A list of collectors of gas station and auto service memorabila from Australia.
Network with other collectors by stating your collecting specialty here.

This page is intended as a listing of collectors and their specialties only.
For specific "wanted" items and comments, use our Shop Talk forum page.
For ads listing petroliana for sale, see our Gas Station Classifieds


Use your browser's "find" button or Edit menu "find" command to search this list for keywords you are interested in. You may need to "reload" or "refresh" this page to see the latest entries. Please do not submit multiple entries.

Join petrolianaAustralia, a list server to network with other people interested in old and restored petrol/gasoline bowsers, pumps & dispensers and other garage/service and gas station equipment.

I have a GOLDEN FLEECE RAM SIGN. It was on the pole outside my depot till early 80s when Caltex took over GF. I also have a new GOLDEN FLEECE shirt and jumper still in the packet
Lindsay Lovell (lovell55@bigpond.com)
Battery Point Tasmania - Sunday, December 19, 2010

anything around the 50's to do with automobiles
steve (stewht@aol.com)
melbourne, Vic, Australia - Monday, August 27, 2007

I have been collecting since 1972 I have bought and sold 1000,s of items over that period some I wished I keept A Wise once told me if you have anything for more than  6 weeks it then forms part of a collection Thus I have a huge collection of stuff.Advertising STUFF Signs,Tins,Bottles,anything that is RARE I am not fussed about buying or selling something  that is common.I will leave that to others.If you have a oneoff you want to sell or buy talk to me.OLD SYDNEY SIGNS
GREG HOWARD (greg@oldsydneysigns.com.au)
SYDNEY, NSW, AUSTRALIA - Monday, March 12, 2007

The gathering of email addresses from this site for the purpose of bulk unsolicited email solicitation is prohibited.
See our privacy policy page for details.