Oldgas.com Home
Just read a post from an old gas member that used to be on here on Face book. Stated that Ron Carey from Canada's Heritage park had been killed in an auto accident in England on the Brighton tour. Very sad news as most all have seen his collection and have either heard of him or have dealt with him over the years. Maybe someone else can bring more light to this.
Craig.
Yes, it is true he was killed early this morning at the London to Brighton car rally. He wife was air lifted to hospital in serious condition. Ron and I have been close friends for many years and I will miss him dearly, my prayers and thoughts go out to his wife Billie and family. The hobby has lost another great pioneer...Ron was eight years young.

Rob
This was released by the media tonight on his death.
https://calgary.ctvnews.ca/mobile/c...ey-killed-in-u-k-highway-crash-1.4668686

Ron was the person Rob wrote about. Amongst other philanthropic endeavors he donated a significant portion of his collection to set up a museaum- Gasoline Alley at Heritage Park. It has been featured on this site a few times.
http://www.oldgas.com/forum/ubbthreads.php?ubb=showflat&Number=144182&page=all
Sad to hear. In our prayers. Paul www.severngaspumps.com
Sorry to here of the lost. Prayers go out to the family.
Attached is a picture of Ron Carey at his Heritage Park Museum in Calgary in front of one of his favorite vehicles which he restored.
I will deeply miss his visits, working together, chasing rare pumps and untold stories.
My prayers go out to Ron's family and a speedy recovery to his wife.

Just thought I'd let you guys know that Ron Carey died tragically yesterday. He was driving a vintage car during a rally in London and was involved in an accident.
Here is a link to the story, Ron Carey News It's a very sad day for his family, and the many people he touched in his 80 years. 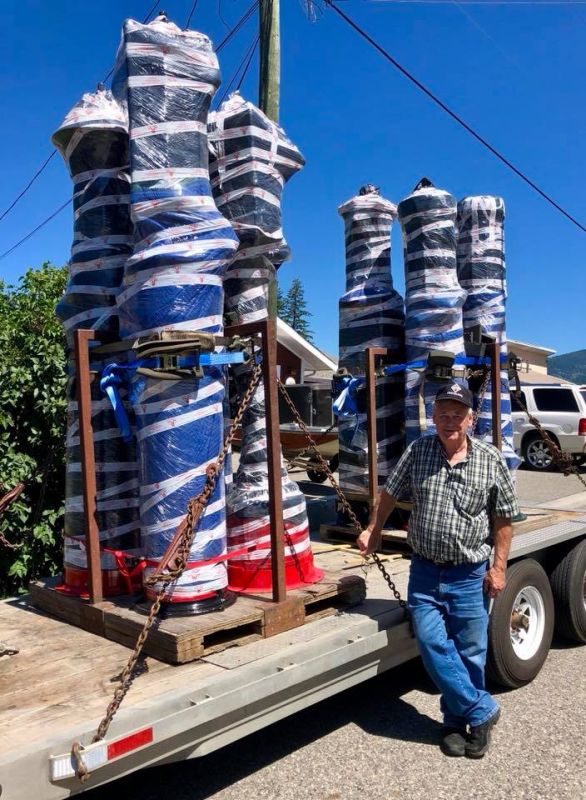 Thanks Lance for the picture of Ron hard at work as usual.
There is a thread started earlier that speaks to his passing.
Sad to hear the news. Our prayers for Ron Carey's family and friends.

Thanks for adding the pictures of him.
Very sad to hear this — was a great friend and help me a lot on my visable project — every time he stop by was a pleasure sharing story with him
Prayers for his wife — Ron going to miss you
I've heard around that he was a great guy and obviously very intelligent by the looks of the way that pump transporting setup was engineered in the above pic!
My condolences to the family and friends!
Sad to hear. Thoughts and prayers go out to the family.
I just spoke to his Son In-law, he is going to let me know when funeral arrangements have been made, I will post it here, and on our Facebook page.
If you had unfinished business with Ron in any form, feel free to let me know, and I will pass your information along.
Thoughts and prayers go out to family and friends.
Any info on his wife? she probably needs prayers for healing also.
Last word was a likely full recovery, but they don't have all the details yet. His Son is in London right now, dealing with everything.
An update on Billi

On behalf of our mother, Billi Carey, we wish to share the news to all of her friends and family that she and her husband Ron were involved in a tragic automobile accident in the UK that resulted in his death at the scene of the accident.

Billi was airlifted from the accident scene to a trauma center in London. Thanks to the professional and dedicated staff in the emergency care facility, she is expected to make a full recovery, despite the severity and extent of her injuries. As well as recovering from her physical injuries, Billi is dealing with tremendous grief at the devastating loss of her loving husband, Ron.

In addition to the care provided at the hospital, Billi has her children, Jaime and Chris, her step son, Shon Carey as well as her brother Dean with her and her dear friend, Stephanie Allen who resides in London.

We wish to express our thanks and appreciation to everyone who has reached out; your prayers and support have been a source of strength for her and our family in what is obviously a painful and difficult time.

Jaime and Chris
Ron's family has set up a Memorial page for friends to share photo's and stories. His funeral announcement, as well as any updates on Billi's condition will be posted there as well. Here is a link https://www.facebook.com/rondcarey
© Primarily Petroliana Shop Talk