Oldgas.com Home
Does anyone know what these little 7 1/4” plates were used for? A member in another group was told they are “blanking plates” and he says he has the same kind from several other gas brands, but he doesn’t know what they were originally used for either. The hole placement seems very specific. Thanks. 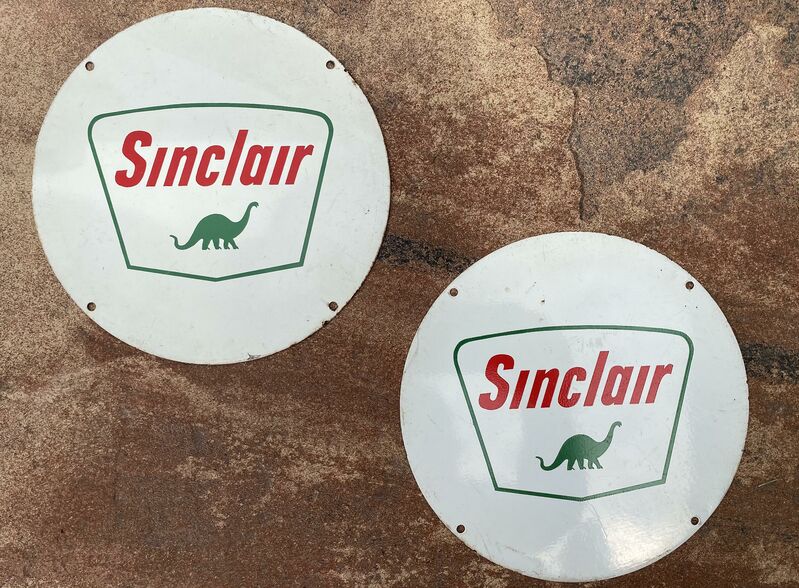 Too big for block off plates at 7+ inches. I collect Sinclair and have never seen anything like this. What do the backs look like?
Here’s the back 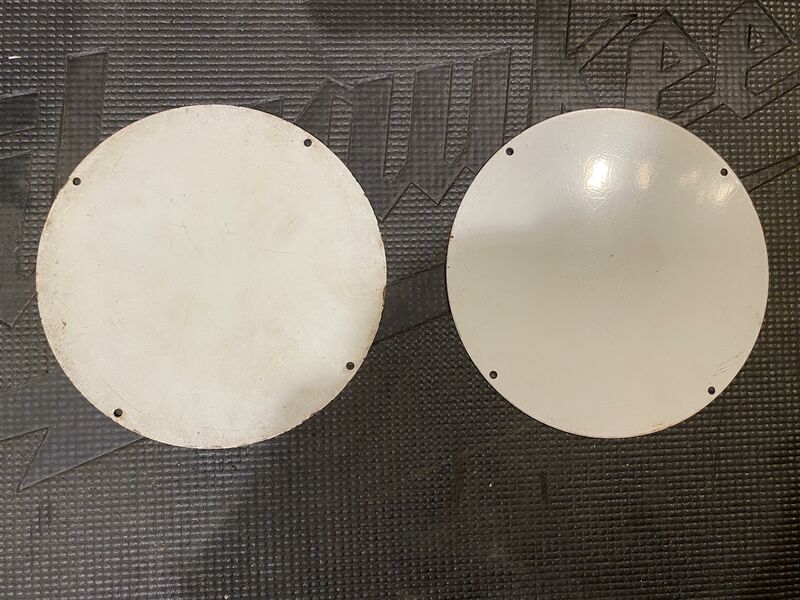 The hole pattern is 4 7/8”.
A member in another group identified them as a plate from a delivery tanker door.
Fake signs IMO.
They are legit. We can’t figure out their original purpose though.
I've been in this hobby for many years. In my opinion, these are aftermarket. Paul www.severngaspumps.com
I'll join in and say my first thought when I saw them was they were a reproduction item of some sort. I just don't see a real use purpose for them. I certainly can't see a 7" round sign as a delivery tanker door plate.
Shell used a 6" porcelain on reps vehicles at one time. 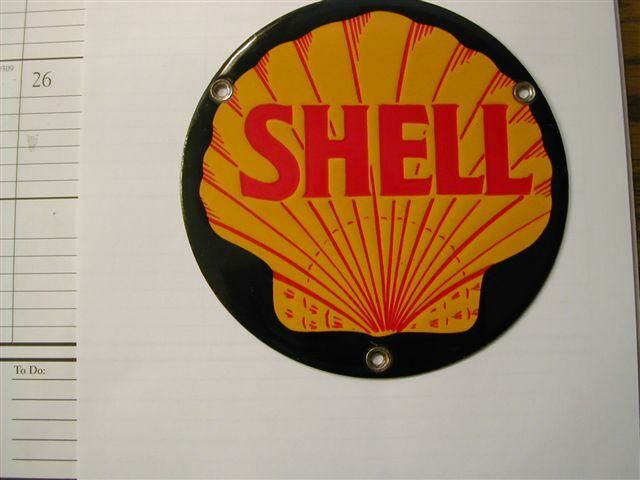 seen one of these 15 yrs. ago with this logo & didn't think it was legit

A member on another group responded to a request for info I posted on any site, regarding these. He posted photos of other identical ones (exact same diameter and hole placement) from
Sohio Texaco, Standard, and Ashland. All had the same era logos from early 60’s. His account of how and when he obtained his is not in dispute. I have no reason to believe that these, like his are reproduction. These are not porcelain. They are quite thin. No good reason to reproduce something like this. They are small, have a relatively modern and boring logo, and serve no purpose to be reproduced. If they are reproduction, then I would expect to find at least one other example of these. I would not rule out them being “aftermarket” as someone else mentioned. That is, they could have been made by some company for the gas industry and sold them for various brands during the era of those logos. For what purpose is yet to be seen. I agree that I personally don’t think they are tanker door plates as someone had suggested. I can Google plenty of pics of tanker trucks and nothing close to this, plus it would seem like anything on a tanker from that era would have a decal or something, but not a little screw on plate.
Sir, In all due respect these signs are not "production" signs ordered by Sinclair and produced for Sinclair (or Texaco, Sohio, Standard, Ashland). I don't really understand all the different words you are trying to use (reproduced, aftermarket, etc.), but my previous statement is my opinion. I have been collecting 35 years and a lot of people will produce a lot or few signs/globes to make several hundred dollars. The "purpose" is to sell them for a little money and make some money, period. My opinion, they have no value except to decorate something.
I have never seen these in any old Sinclair photos or at any swap meet. You would think if they were real they would show up in some original photos. If anyone has an old photo of one of these signs in it please share as I would like to see it!
To help clarify the terminology, I would define “reproduction” as a replica of something or a similar copy. There are “fantasy” pieces that were never originally made in any form, but are created for decorative purposes. I would define “aftermarket” as something that is made by a third party vendor to serve some functional purpose. Typically a part. I’m not saying that these were made by any oil company. All I can do is compile evidence to come up with a reasonable explanation as to what these are. I don’t know what they are. The best source of information I received so far was from the gentleman who has the similar ones who said he got them quite awhile ago from a guy who’s father was a Gilbarco tech who served the southeast area. He described them as blanking plates. All I’m suggesting is could these be some type of “aftermarket part” that was not made by Sinclair, Ashland, whatever that a pump tech would use to blank out something on a pump or other piece of equipment related to fuel or oil?

I’m not trying to be confrontational in any way. I just don’t see the money making potential in someone trying to reproduce this for profit. I paid next to nothing for these. If someone has been collecting for over 30 years, you have probably seen most of the junk out there. You can also probably find other examples of the junk with a quick internet search. If you can find another example of these that someone is making money on, please share. It would really help clarify what these are for me. If someone went through the effort to make this one pair, it was a moneymaking failure on their part.
Here are the other varieties that the other member gave me permission to re-post 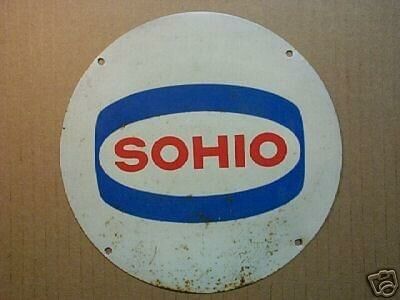 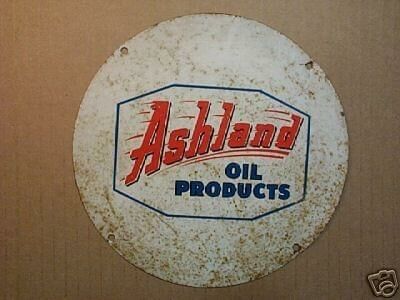 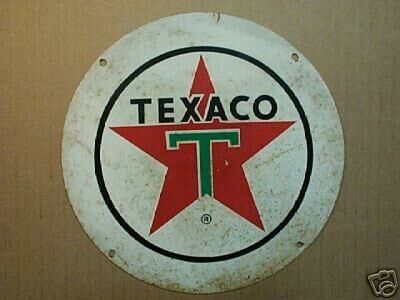 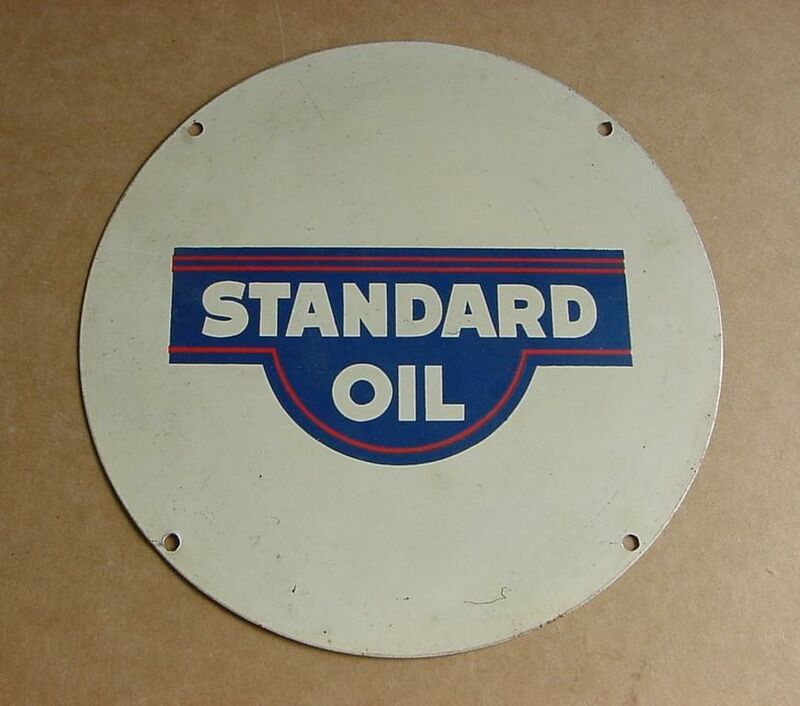 not a chance in hell they are original from any of those companies.................. and im not even anykind of an expert!
There has been so much "decorator" gas/oil small sign sh-t produced since the late 1960's. Some of it was made for a short time...some of it longer. Some of these resurface more often than others these days. But, just because an example is seldom-seen in today's marketplace isn't a reason to think it could be real.

After seeing the logo work on the signs for the other gas and oil brands....I'll echo what has already been stated by quite a few others here. These signs are undoubted reproduction, decorator pieces. I have no idea why borntoolate keeps insisting he's sure these are NOT repo's. Perhaps we should simply stop trying to convince him. John
For starters.... some of those gas company logos aren't even from the same era, even though all of those signs in question were produced at the same time. So they are most certainly fantasy decorator items.
I understand that these things make no sense. It would not be logical for me to completely dismiss the information that was given to me by another member (who by all accounts is a veteran gas collector) about these things and how and when he obtained them. When he says he got them from an old Gilbarco tech who told them they were blanking plates, I will take his word as to what he was told.

That said, it doesn’t mean that it’s what they really are. Since they are all the same plate, but with various logos, maybe they could have been some promotional junk that someone was giving away of some other decorative item that the pump guy was just using as a blanking plate for something because they had a bunch and they were handy to cobble something up.

I was really not trying to make these into something they are not Just trying to respect the info that some have taken the time to share and expand on it. Thanks for the feedback.
Well said BTL. I understand. You have all the input to digest however you want. Thank you and enjoy the fun!
© Primarily Petroliana Shop Talk