Oldgas.com Home
Some of the younger members have probably never heard of this. 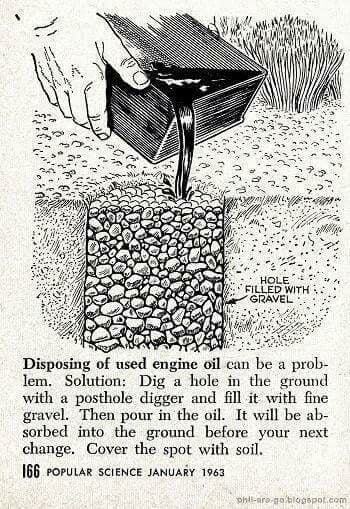 I dare you to re-publish that in a magazine. Lol
Wow
I have done that before

At one time it was called "weed control!"
This is the last place Greta will look. I think we're all safe

I thought everybody did that back in the day!
You buy it at the store but where does it actually come from.
Lol
I dont think anyone took the time to fill the hole with gravel first before dumping the oil in! I'm still not convinced this is really all that horrible to do.
For those on here who have never seen or experienced using post hole diggers here is a youtube clip. This is about the best one I could find.

https://www.youtube.com/watch?v=DwCvfEnWe2I&t=3s&ab_channel=FIXITHomeImprovementChannel
On our farm, used motor oil was applied to shiny plow shares to prevent rust. We also poured it on the dirt lanes to control dust. Many uses that to this day, I see no harm in? Paul www.severngaspumps.com
We also used to pour a little bit of oil on areas of standing water in the spring and summer. It does a nice job of smothering mosquito larvae and reducing mosquito population.

Originally Posted by gasmansgp
On our farm, used motor oil was applied to shiny plow shares to prevent rust. We also poured it on the dirt lanes to control dust. Many uses that to this day, I see no harm in? Paul www.severngaspumps.com
We also used grease to protect the plow shares.
When I moved into my first houseback in the 70's, I dug a hole behind the garage and filled it with oil. I forgot about it for awhile The neighbors daughter saw me leaving one day and told me that when it had rained, the oil was displaced in the hole and flowed downhill. It went straight to her mothers garden. Luckily, her mother didn't hold a grudge. Over time, we all became good friends and I was treated like one of the family.
On the farm dad would have me pour the used motor oil over the tops of the fence posts. That was over 50 years ago and some of those posts are still solid in the ground.
Tom.
My dad still does this on the same spot on his property. Been doing it there for over 25 years now...

Sydney
Did it all the time too when I was growing up. We had a big gully there close by, just poured it over the edge. I bet my Dad still does...

We also rode bicycles and mini bikes with no helmets, rode in cars with no seat belts, rode in the back of pickups sitting on tailgate or standing behind the cab too! And we’re all still here to talk about it LOL!
© Primarily Petroliana Shop Talk