Oldgas.com Home
good tip for ebay buyers too stay away from - 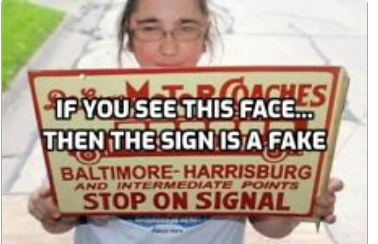 THAT'S RIGHT 4 SURE
I completely agree!
They should have used one of the pics where she has a grin EAR TO EAR, as the smile is almost permanent from them laughing their way to the bank with all the ***** they're selling for crazy money!!
Darin
What I'm amazed at with her, is the amount of positive feedback she gets on ebay. Over 8000 positive in the last year. Only 122 negative in the same time frame, and the vast majority are complaints about not combining shipping, not hey this sign is not REAL. So the vast majority are buying without ever figuring it out. And she is selling like 800 items a MONTH according to feedback! Thats crazy. Some items do go cheap though, so some people must be figuring it out, maybe.

My brother and I talked about this, when you see her face you know its a fake sign. I couldn't help but think, you know maybe you shouldn't put your face in the pictures! But she does, and we were speculating she does that on purpose, so she doesn't have to deal with more experienced sign buyers that would push back. It's kind of like saying you recognize me?, then you better not be buying thinking its real.
EBAY should Banned her
I won something from her 2 years ago.I then found out from another it was a homemade,and cancelled my payment.
She gave me my payment back,and refused to respond to my claim calling it homemade.
I saw her re-list the sign the next week.
It then sold for 3X more then I had won it for previously,no wonder she refunded me my money so quickly.
I can't believe there are so many constant naive buyers out there.
Sad thing is there are a lot of people out there that don't care one way or the other. They just want something for their "man cave". Man I hate that term.
Everything this seller sells is not fake. I agree that most of what they sell is fake but they do sell some original signs and other items. Just being fair to all....
To Be Fair IMO then they should post what is Fake & what is real