every Mecum auction I've been to... they do not offer shipping. they outsource it, usually to craters & freighters
Yeah,forget that.If i bye an expensive can i want to know who's packing.Too many in the loop.
Just a word of caution here, The display pumps need to be looked at closely, there have been repros sold in auctions without buyer knowledge. Have a person of knowledge look at these for you as a buyer to be sure. Sometimes the auction houses do not know for sure.
How do you go about getting a catalog. I talked to a friend that had gotten one but he didn't know why as he has never attended or bought anything from Mecum.
For Mecum newbies; go to Mecum website and order one for $25
What an amazing offering! Can't believe how many duplicates of hard to find items. This one is going to be interesting to say the least.
So I paid Mecum $150 to register as a bidder for their Kissimmee sale in January and now to bid in this auction I have to pay $150 again? Am I getting this right? Unless I pay $500 for a "gold" pass to bid for the entire year I have to pay a $150 admin fee to register for each individual sale?
So, let me get this right. You have to pay $150.00 to be there, buy an item and then get spanked with a 21% buyers fee/tax? I'm in the wrong freaking business!
miles
I'll get a gold pass and will bid on everything you want all year long,if you pay me $100 for each show & pay their fees too.

So why does Mecum not tell condition of signs? I watched another auction of theirs and many items were said to be repaired, had reserves per guys at auction. What are we hiding, yet want all the fees just to bid or attend.
Greed usually does not end well
if you've ever actually been to one of these sales its pretty surreal. They do a big countdown before the sale pumping up everyone's adrenaline blaring rock music through concert quality speakers and then its off to the races and they don't stop till its over. They don't skip a beat, instantly rotating in fresh auctioneers after every couple lots and their people deftly working the crowd, prodding bidders along. It's amazing to watch people get caught up in it-anyone can justify high prices on good quality stuff but I watched I guy pay $400 for a common gargoyle that he could have easily obtained on ebay for $100!
this auction does have reserves on all lots
^^^ I'd recommend calling them. Everything is more confusing when going thru Mecum's website, cause most of the forms are for auto sales. They are usually easier to deal with by phone
Does a guy have to pay the $150 fee to bid online also?
Mecum Auctions
(262) 275-5050
I don't believe so, just register at bidnow.mecum.com
even if you only wish to bid online there is a non-refundable "registration" admin fee for each individual sale unless you have purchased your $500 gold pass for the year. Call mecum auctions and ask for Debbie Rowan w/ bidder registrations. These reg fees ofcourse are exclusive of the credit card deposit you must also commit to before bidding.
Originally Posted By danlap99
this auction does have reserves on all lots

I had an employee look into this. After they spoke to Dana and Dan Mecum it was confirmed "Everything is NO RESERVE" !!
Folks,

Going through the pictures of the “auction”, something grabbed my attention: the BIG 47-inch MUSGO sign.

I thought there was only one in existence that was sold in recent "auction".

There are a number of Musgo signs known to exist. Most were used as septic tank covers when the Musgo refinery and buildings were purchased by a Michigan plumber. Most were dug up from underground quite a few years ago by early collectors, so no, there are a few around.
Thanks for the heads up, Luke!
I spoke with Debbie Rowan from Mecum, she said that there are no other fees for online bidding for road art other than the normal BP and shipping. The $500 gold pass is for automobiles only.
I talked to a very nice lady from Mecum's today to find out what I had to do to bid there in person. She explained every thing to me. I am leaving in the morning. If you see a old gray haired man with a Frontier jacket on say hello. She also told me that they had over 2000 online bidders signed up. Mitch
IMO, Mecum has done a great job with their web-site.

I was wondering if Mecum is showcasing all the memorabilia at their site? If so, what a theme using Reclaimed Wood Feature Walls. It gives great accent to signs & pumps!

Henrik
I believe it's all mostly from one single collector Henrik.That's his building.
Thanks for the heads up, Rick!

Now, wouldn't a super-collector want to buy the entire collection + the Building?

Originally Posted By Cold Pizza
I believe it's all mostly from one single collector Henrik.That's his building.

Buyers Premium is 23%
Originally Posted By Done4
Just took a peek at the auction and bids are strong on a lot of items already.

i just looked at the current bids, wow. stuff will be starting off strong!
we are definitely going to see some records over the next couple days...

look at this one, and the on-site bidding & phone bidding hasnt even begun yet!

Yeah, I about keeled over when I saw the Shell can go for that amount.

Musgo sign
what's going on??!!!-$1500 for an empty mobil gargoyle crate? If anybody else out there thinks that these are nifty please PM me-Im tripping over them. very nice, NOS and if you take them to a show-nobody even picks them up...ever!
Originally Posted By gaspower
Originally Posted By Cold Pizza
What sold for $230,000.00? 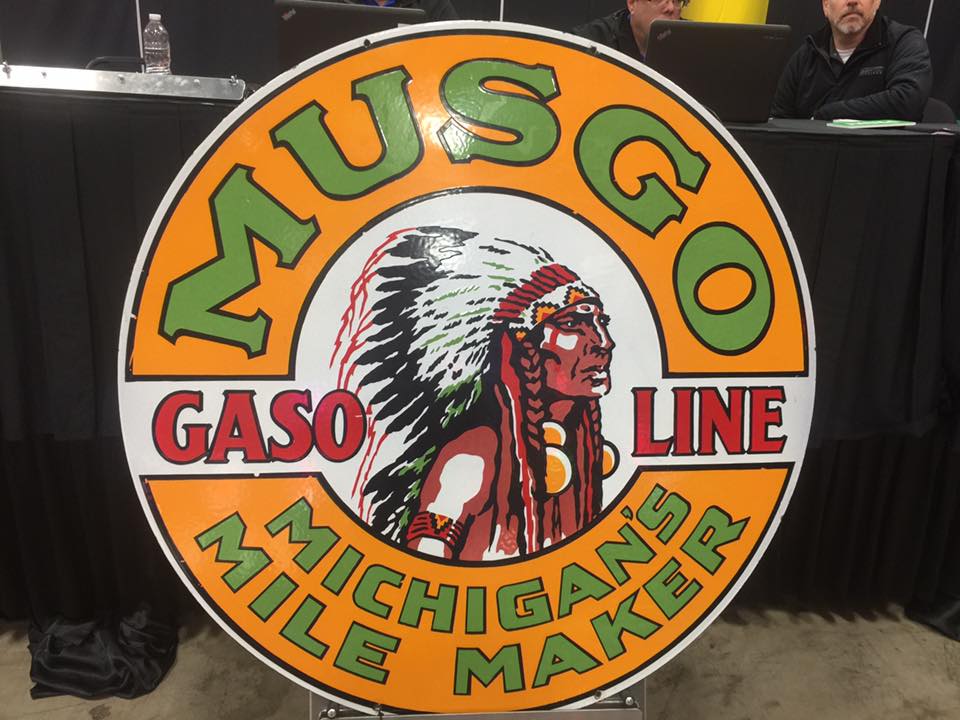 I have been here since Thursday and the prices are crazy. When that mobil box went for that. And the falcon can. Wth. Oh well one more day.
One more thing. Anyone waiting to bid on lot 212 texaco lense and body dont. They were removing a sign above it and the vibration popped the lense out onto the concrete.
Originally Posted By Mike M.
Originally Posted By gaspower
Originally Posted By Cold Pizza
What sold for $230,000.00?

No one seemed to mention 10 spots of touch up on one side and 8 on the other. CRAZY !!
I actually blew the day watching the auction and I don't know what made me more dizzy, the prices or looking at the computer? I could not beleive they started common oil cans at $100.00! Watch the hell is going on!!???
I hate to say this but, someone is not watching what they are buying very well. That ADC should have been checked closely as it might very well have been one of the Repros that have been showing up in those auctions. $64,000.00 Come on !!
Originally Posted By Chevrolet SS
Originally Posted By Mike M.
Originally Posted By gaspower
Originally Posted By Cold Pizza
What sold for $230,000.00?

No one seemed to mention 10 spots of touch up on one side and 8 on the other. CRAZY !!

Really?
$800 for a common Archer quart that can be bought on EBAY everyday for $40. Even got a full page billing in the catalog. Great graphics but available in huge quantities, a $40 can!
Wow, the cash is sure flowing, keep the average Joe from hitting the bid button or looking in the want ads for a better paying job. One this that is nice Mecum showing more than one picture of the items, showing the bad areas and all around the item, wish more auctions would do this.
I wasted yesterday in front of the computer, waiting for something to fall thru the cracks. It won't happen today, as it is too nice outside to waste it on watching this sale!
Originally Posted By Craig Osbeck
I hate to say this but, someone is not watching what they are buying very well. That ADC should have been checked closely as it might very well have been one of the Repros that have been showing up in those auctions. $64,000.00 Come on !!
I can't say positively, but a very good possibility that those were pumps made by Bill Biggs.
Pat
Looks like Mecum got the name right..."Road Art" this stuff is trading like Picasso's and Rembrandt's. We look at sign prices and say they can't go up any farther. Are we seeing a trend that rare signs are being treated the same way as masterpiece painting?...Just saying something's going on here.
Tom.
Pumps for the most part are the things that are not really bringing the big dollars here except for the two big dollar ones. Some of the pumps are actually going below retail. Very disappointing for sure for the person owning these pumps. Even some of the bigger dealership signs are not bringing the big dollars. Porcelain though, rare pieces are way way over the top. You are right here in seeing a trend for the really rare pieces over the last two years. Different buyers for sure.
Pat, That pump at the auction was not one of mine. Howard told me that the pump was original except for the door which someone had made out of a shower.
The Rush and fry went for less than you can restore them for.
Yes, I believe that the ACD is original after viewing it many times and up close. There have been in the past though some of these that are repros. Note the top screws and the heavier potmetal castings not stamped tin plated. But again, lots of money.
You are right Phil, some went for less than restoration cost.
WELL JUST GOT HOME FROM MECUM. SPENT 3 DAYS THERE AND YES THINGS WERE CRAZY. ALOT WENT TO ONLINE OR PHONE BIDDING.
Was eye opening for sure. Two groups of people made tons of cash yesterday being the owner and auction house. Not sure about the rest of crowd but reality is some have a pocket full of money to spend on signs and cans. I realize I wasn't one of them. At least I got a nice catalog to look at. How much fun would it be to know what owner paid for his collection. All and all was nice to see some things I had not seen before.
Who owned and looks like some items were purchased in the last two years or so.
i was there... didnt buy much, about 15 cans, one sign, and one globe.

the signs were nuts. neon was about right, and pumps were about right and some low. globes were high on friday, but a lot went about right on saturday. the signs stole the show.

lots of bidders there that you could tell they didnt care what they paid... they just wanted it.

it was an unpleasant surprise to find out you had to pay $100 just to bid on-site. that really made no sense, considering you could bid for free online.
We've heard a lot about high prices and such, but it was what it was. Give a little credit to Mike Worley for amassing such an incredible collection. Let's just say I hand over to you a 100 million to put together a similar collection, do you think you could do it before you die? I couldn't!
It's hard for me to comprehend the quality of items that have been put forth into the hobby recently with the Kyle Moore and Worley auctions. I feel very fortunate that although I wanted more, was able to get a few items.