For the last half-dozen or so years, the weather at the annual Columbus show has been very hot, but at least there was no rain to speak of. This year things were different. The forecast called for heavy rain on both Thursday and Friday, the two scheduled days of the event.

Although supposedly a set-up day, Wednesday has been a strong buying and selling day in previous years. Due to the ominous weather reports, it saw a lot of activity well into the evening. The action was mostly in the rooms, vehicle parking lots and the ballroom, as most outside vendors were hesitant to set-up with the almost certain monsoon approaching.

An overcast and threatening Thursday morning saw dozens of anxious vendors "sort of" set-up, while an equal number scurried to create major displays within their hotel rooms. By myself and without my tents for the first time in years, I wimped out, grabbed some stuff and headed for the room as the first drops fell about 11 a.m. The torrential rains did arrive, but not until Friday morning. Tents didn't really help and for all intents and purposes, the outside show ended when the heavy rain began in earnest.

I didn't pick up on any really new trends during my stay, but it was hard not to notice the still climbing prices of marine, rest room, aircraft and no-smoking signs. Really early items are more in demand and many people now consider half-century old, 1940s trinkets to be late model. Unusual globes continue to bring big bucks and it doesn't really matter if they're attractive or not. Map rack (any brand) prices are still soaring, while growing numbers of road map collectors are becoming more discriminating. The salt and pepper madness has cooled off a bit, but hat badges are still red hot. Oh yeah, more women are vending, guys are wearing their hair longer and there is a growing preference toward Suburbans for swap meet "beaters."

Event attendance was up again this year, with a total registration of 210 and over 260 outside spaces taken. Twenty vendors filled the 3,800 square foot ballroom, while the remainder dodged raindrops on the parking lot.

Alas, it looks like this second year at the Columbus Clarion is the last. It was an improvement over the old Days Inn, but the hotel is unwilling to make the necessary dates available for next year. The search is on for a new location but Jerry Keyser, Jr. has informed me that negotiations are already underway with another hotel for the 1998 show.

Next year's show dates are set for Friday and Saturday June 19-20. Yes folks, back by popular demand is Saturday! Saturday has been a "problem" in the past and was dropped for the first time this year. Previous events had seen many vendors pull out on Friday Night, leaving a sparse show for the final day's visitors. As with most areas of collecting, everyone wants to be the first to get to the goodies, but at many events this has gotten totally out of control. The current "fantasy swap meet" joke is an event that takes place on a Tuesday and Wednesday. Everyone agrees that the preceding Saturday would be a killer. 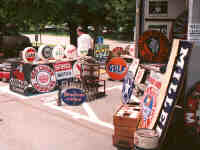 Saturdays at Spring and Fall Carlisle remain strong but most petro and automobilia vendors are gone. It's unfortunate and I don't know what the solution is. I do believe that our ranks can't grow if we continue to encourage and/or support weekday only "private party" events that tend to dissuade new people from joining us.

Even with the rain, my visit to Columbus was still a "gas." Thursday evening in the hotel lounge found a group of us seated next to a table of people that were rumored to be Secret Service agents. A planned visit by Vice President Al Gore to Columbus had sent this advance party to the hotel. When prompted (OK, I was dared), I walked over and asked if they were, in fact, Secret Service agents. The lean one had a blue suit with an American flag lapel pin. He wore a buzz cut and sported thick black plastic-framed glasses. He gave me an icy look and with a crooked half smile said, "Yes we are, and we've heard about you guys." Honest!